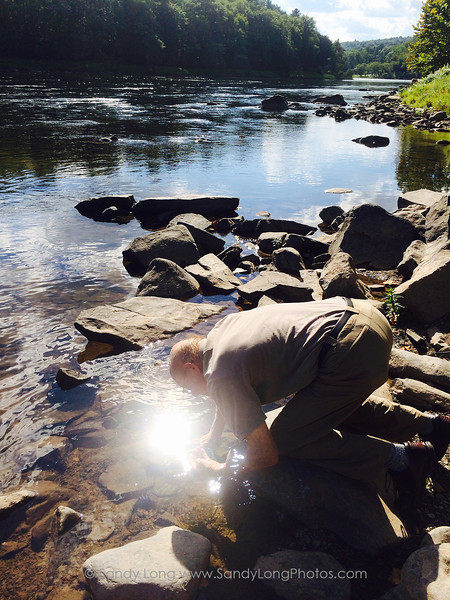 And so, on the 50th anniversary of the Wilderness Act (9-3-2014), when the afternoon hours of golden light extended their invitation to interface with something more wild than the computer screen keeping me captive, I decided to “spend my life” outside for a few stolen hours.

Called up Dad, lifelong fan of the natural world, who seized the opportunity to help locate a lake I’d heard about. We eventually found it, accompanied by our canine companion, Bu, who nearly drifted away on a floating dock and neatly nabbed part of a rotting hotdog left behind by folks whose other fishing litter we gathered up.

Unpacking our picnic, we three perched on a truly artful lichen-labeled boulder under a startlingly sunny sky as cotton-ball clouds buffeted by.

Next, made our way along the Lackawaxen River, glimpsing a bald eagle as it attempted to lift a fish from the white-capped water. Ended the day with a magical hour spent on the banks of the mighty Delaware River, joined by 9 mallard ducks dabbling nearby before paddling up to pose for pictures.

Whenever he’s near a river, Dad can rarely resist the lure of the water. So down he went on hands and knees, gently lifting rocks along the shoreline, looking for evidence of other lives, puzzling over how they spend their days, even as we celebrated our wild time together.